Did you know that the first draft of the Declaration of Independence called for the elimination of slavery? 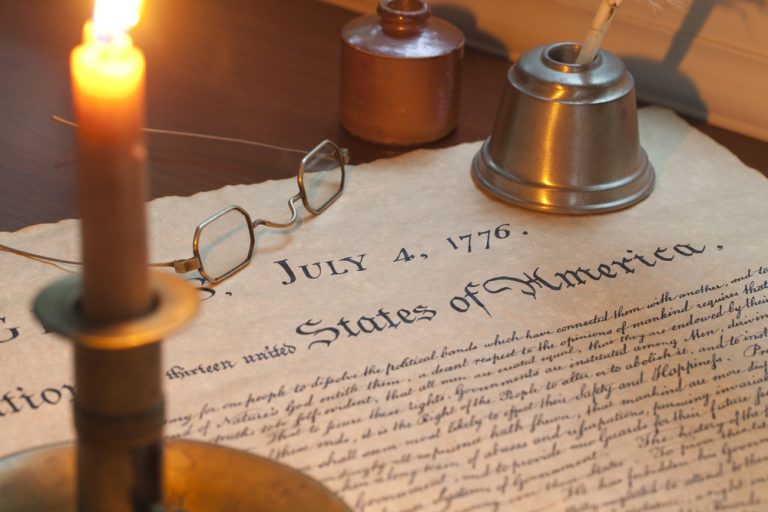 Modern day progressives criticize the founders for not eliminating slavery. But the issue was a lot more complicated than they like to admit. Our founders fought hard to eliminate slavery as quick as they could without tearing the country apart and even included the elimination of slavery in the first draft of the Declaration of Independence.

Thomas Jefferson, a young politician from Virginia, was charged with writing the world’s greatest breakup letter ever, and that breakup letter is the Declaration of Independence. In that letter 27 grievances are listed for the reason that we were breaking away from Great Britain. But the first draft actually included another that didn’t make it into the final draft. The one that was eliminated was a very long section on slavery.

Now you could say well “See that’s proof that the founders were racist because they could have eliminated slavery but chose not to”. Not exactly. Because we were a new nation, the Founders wanted everyone to be united on the new rules for this nation. They wanted unanimous consent on each line of the Declaration so that the king couldn’t come in and use our differences against us and divide this new nation. The Founders voted unanimously on going line by line through the proposed Declaration. When they got to the section on slavery, just 2 of the 13 colonies voted against it. Which two states those were weren’t known at the time but decades later, Thomas Jefferson wrote in his autobiography about the fight to end slavery and identified these two states to be South Carolina and Georgia.

If you ever heard the term “We must all hang together or we will surely hang separately” it dates back to 1776. John Hancock, President of the Continental Congress, stated in a meeting to Benjamin Franklin (who later became President of the Philadelphia Society for the Relief of Free Negroes Unlawfully Held in Bondage, often referred to as the Abolition Society) that “We must be unanimous…there must be no pulling different ways; we must all hang together.”9 Franklin replied to that claim with “Yes…we must, indeed, all hand together, or most assuredly we shall all hang separately.

The topic of slavery was actually the longest section of the original draft, taking up about half a page. In that draft, Thomas Jefferson wrote “He [King George] has waged cruel war against human nature itself, violating it’s most sacred rights of life & liberty in the persons of a distant people who never offended him, captivating & carrying them into slavery in another hemisphere, or to incur miserable death in their transportation thither. this piratical warfare, the opprobrium of infidel powers, is the warfare of the Christian king of Great Britain. determined to keep open a market where MEN should be bought & sold, he has prostituted his negative for suppressing every legislative attempt to prohibit or to restrain this execrable commerce: and that this assemblage of horrors might want no fact of distinguished die, he is now exciting those very people to rise in arms among us, and to purchase that liberty of which he has deprived them, & murdering the people upon whom he also obtruded them; thus paying off former crimes committed against the liberties of one people, with crimes which he urges them to commit against the lives of another.”

There are several things that need to be pointed out here.

The Left has done a great job at erasing history. They painted this picture that our founders were all racist men who supported slavery. But the facts say something completely different. Sure there are some that did support slavery but a vast majority fought to end it. We must begin to teach actual history again. We must begin to debunk the claims coming from the Left with things like the 1619 Project by pointing people to the documents and what our Founders actually believed when it comes to things like slavery, so please share these articles with your friends. But don’t just take my word for it, go to the original sources and read them for yourself.

There is a really great organization that is working hard to preserve history, and that is the American Journey Center. I’ve had the opportunity to visit this museum several times in the last year. They have a great piece out on their website which you can find below.

If you are in a position to and want to help preserve the history that Progressives are doing whatever they can to erase, you can donate here.

Subscribe to my free newsletter below so that you never miss a story. This is an email that goes out every Monday morning that will include any articles published in the previous week, including Founders Corner articles and articles on current news stories.

All Posts »
PrevPreviousDEA Seized Enough Fentanyl in 2021 to ‘Kill Every Single American’. Why is Our Government Refusing to Act?
NextThe proof that your children are being groomedNext